I Was Wrong – Are you willing to admit a mistake leader?

Leaders gain greater respect and trust when they are willing to admit a mistake. So do employees, husbands, wives, fathers, mothers, and children. Why? It’s pretty simple; people appreciate honesty and the fact that all of us make mistakes. Many people when faced with admitting they are wrong will take the prideful stance and try to justify or even deny the mistake. 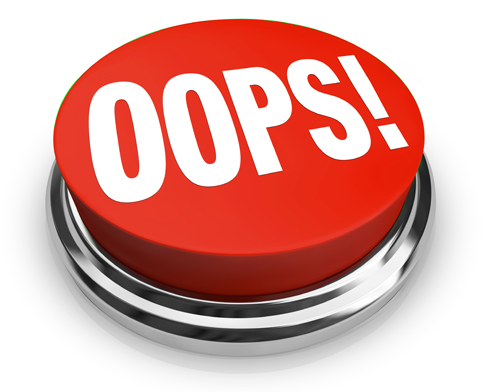 It is rare these days to come across news of someone admitting they made a mistake. For that reason I love this simple news story recently reported in our local newspaper – The Spectrum & Daily News titled “Vehicles collide on Main Street.” Michael Hurley (18) said after an accident with 64 years old Phyllis Richards (who received minor injuries) "This is the first crash I have ever had, he said. I was just going too fast and I didn't see her. My main concern is not about me. I am concerned about her. I'm really shaken up, I feel terrible.”

What is your perception of this teenager? Now, put yourself in the role of an employee who has a boss who made a mistake that everyone is aware of. If your boss refuses to admit the mistake and take responsibility, how do you feel about that boss? Will you trust that person? It is difficult to follow a leader who isn’t trustworthy.

Take responsibility and honestly admit your mistakes, you will generate greater loyalty from those you lead.

Are you willing to admit a mistake? Do you find it difficult? Why?

Mike Rogers
Founder and owner of Teamwork and Leadership

Mike has led, trained and consulted in business with hundreds of
individuals and teams on leadership and team concepts. He has served in a
number of entry level to senior level positions in both business and
volunteer work. His greatest satisfaction is seeing others succeed.

He is the proud father of eight children and one Grandchild and has
been married 25 years to the best part of his day! If you would like to
contact Mike you can do so at mike@secondg.net