There are coaches and there are leaders

This is a guest post from Phil Wrzesinski , President of Toy House and Baby Too, America's Largest Independent Toy Store.

I love stories that talk about the quiet and unheralded leadership heroes of America. Coach Johnson is one of those leaders and heroes. 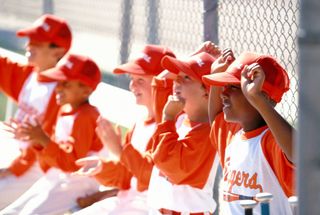 A Coach and a Leader  by Phil Wrzesinski

My son's little league team lost in the playoffs last night. It was amazing they even made it that far. This was a team of castoffs from the start.

Four weeks after practice began and two games into the season, a few kids had been mistakenly left off teams. Rather than add them to existing teams, the league found a coach and created a new team by drafting kids from other clubs. No one would admit it, but since each existing team had coaches' sons and hand-picked friends, the kids drafted (including my son) were the 7th best kid or worse from their respective teams.

With little practice time and no printed schedule for the first three weeks, Coach Johnson did the best he could to figure out what he had and build some sort of team. In their first week of games, little Noah, one of the smallest kids in the league was hit by a pitch two or three times. It took every ounce of courage and every word of encouragement from his coach for him to even step back in the batter's box. In their third game, they lost 14-3 in 4 innings to one of the premier teams in the league – victims of the mercy rule that only allowed 5 runs per inning.

There were issues with the rules. Coach Johnson was given one set of rules. Apparently other coaches had decided to use different rules, and the umps seemed to have a rulebook of their own.

Still, through encouraging words, never allowing his kids to feel like castoffs,Coach Johnson crafted them into a team that could win. Even without a true pitcher, they won enough to make the playoffs and face one of the three teams that had mercied them earlier in the season.

But last Thursday they went up against the #1 ranked team that had beaten them 14-3 earlier, a team loaded with all-star 10-yr olds instead of a mix of 8 to 10 yr olds that other teams had.

For two innings neither team could score. In the 3rd my son's team took a 2 run lead that they held until the bottom of the 5th. The game entered the 6th and final inning all tied at 2. With two outs in the top of the 6th, our last chance was little Noah. The dugout was cheering him on, knowing that a walk was probably the best they could hope. Noah had barely stayed in the batter's box, let alone actually swung at a pitch. This time, with teeth gritted, Noah did stand in there and swung with all his might. The bat met the ball with a force that shook little Noah to his toes. But he held strong and watched the ball head sharply toward right field.

The players in the dugout jumped to their feet urging Noah to run. The crowd was cheeringly loudly. The noise was deafening, louder than at any other point in the game. Little Noah's legs churned as fast as they could.

The first baseman, unaffected by the cacophony of crowd noises, calmy scooped up the grounder, took two steps towards first base and made the out, with Noah still 15 feet away.

But there was no groan from the crowd nor the dugout. No moans at the lost chance, no 'aw shucks' or 'too bad'. The cheering continued. And continued. Noah was given a hero's welcome as he returned. Every player slapped him a congrats on his helmet as they headed out to the field for the fateful bottom of the 6th. Coach Johnson had taught these boys that there were things more important than hits and outs.

Even the cheers from the crowd of parents who had witnessed Noah's trials from the beginning never abated. His parents were given high fives and pats on the back as he jogged out to right field.

One batter later, however, the game was over. A missed call by the ump, some intimidation by the opposing coach, and a couple of bad throws ended the game 3-2. But there were no losers in this game. Coach Johnson wouldn't let it happen. After the game and the obligatory handshake, he called his team together.

At the end of the season each player gets a free coupon for a Pizza Hut pizza. But Coach Johnson went one step further. He didn't call it a gift or freebie, he called it an Award. Before he handed each kid his coupon, he called them up and explained why they were getting this award. He talked about each kid and his contribution to the team. He talked about the energy and can-do attitudes they brought to the season. He talked about their desire to never quit. He talked about determination and always holding your head high. By the time he talked about Noah, there wasn't a dry eye in the crowd, parents and kids alike.

Coach Johnson coaches whatever sport needs to be coached. He already had a travel basketball team when they called him to coach little league. And now he's running practices for a summer football team. He asked my son, who is big for his age, if he would like to play football this summer. My son, who does not like physical contact at all, actually gave it some consideration. Why? Two words… Coach Johnson.

I had my doubts on this season. My son was on one of the best teams to start the year, great coaches, great players and great parents. I sat through two nights of tears when he found out he was drafted to the new team. I had my reservations watching the first practice and seeing the lack of talent. And when Parker's old team mercied them early in the season, I sat through another night of tears.

But after last night, I can honestly say I'm glad it worked out the way it did. And my son would agree. He still wants to go the final game to cheer on his old team, but he has no regrets for how his season turned out, except maybe that strikeout in the 5th inning.

There are coaches and there are leaders. This summer, a group of 8 to 10 year old castoffs got both. And I doubt any one of them will forget it. My son and I certainly won't.

Thanks, Coach Johnson, for making this season special.

Question… Are you coaching or are you leading?