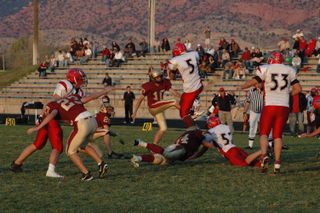 An amazing thing has been happening with my 12 year old son lately. He is kicking the guts out of footballs with great accuracy, and I don’t even have to push him! Let me give you a little bit of background.

My family is a soccer family. I tried to get my kids (and I have eight of them) to play the great American pastime – baseball – because that is what I played as a kid. But they would rather kick a soccer ball than get hit with a baseball, and maybe I can’t blame them.

Because they kick, and kick a lot, my second oldest son who was then 16 decided he wanted to kick footballs as well. He became quite good at it, demolishing the high school record for the longest field goal at 52 yards. He was recruited as a place kicker by several colleges. Here are his YouTube highlights. Click here if you are interested.

My 12 year old son has decided recently that he would like to kick as well. He is very accurate at kicking field goals 23 yards out, but can’t kick one longer than 28. Strength training and flexibility are the only way he is going to kick longer, but he really doesn’t want to do that. Without increasing his strength the chances of him kicking longer are almost zero.

So I decided to do with my 12 year old son what I have done with many teams that I have developed – set a concise and measurable goal with a reward in sight. Our conversation went something like the following: I said, “How far would you like to be able kick by the end of the fall?” He said “35 yards.” I said, “Okay, what do you think you have to do to get that far?” He said “I will have to become stronger.” I said, “Yes, that’s right.” “So here is the proposition,” I said “you kick a 35 yard field goal, and I will take you to a Division I football game” (this will require about a three hour drive). Once I put the reward out there and we discussed the ways he would be most likely to achieve his goal, he became very motivated. He started doing sit ups and leg strength training on his own. I didn’t have to push him one bit. He began to hold himself accountable.

1.   Create one or two goals that become your main focus, not more than that. If everything becomes important, than nothing will be. With my 12 year old son, his main goal was to simply kick a 35 yard field goal. That was his only goal. Goals should be concise, clear and measurable.

2.   Once the goal has been set, ask others how it can be achieved. Whether you are an IT support person or a vice president, your goals should line up with the organizations goal. And you should be clear on how you contribute to it. This is often referred to as line of site. Since setting his main goal to kick a 35 yard field goal, my son has created other goals or what might be better termed objectives for reaching his goal. He was able to do this by my question to him “What do you think you have to do to get that far?”

3.   Dangle a carrot. Individual rewards are important, but always put team goals ahead of them. If you are constantly rewarding individuals and ignoring team accomplishments, then most individuals will put themselves before the team. This creates a great deal of inefficiency on teams.

Teams that are motivated with team rewards will hold one another accountable instead of the manager holding them accountable all of the time. And as I always say, this is a beautiful thing when it happens. With my 12 year old son all I had to do was say here is the reward and with a couple of guidelines simply say, you figure out how to get there – I will stay out of it. He held his self accountable from there on out. Teams will do the same if the carrot means something.

Mike Rogers
Check out my blog at www.teamworkandleadership.com

Next post: I Love Being Human! How about you?