Here is one of those types of stories that we have discussed on this blog before (see "Why  Should Leaders Tell Stories" by clicking here) that can build immediate trust with those you lead. And it may change your life as well.

Once there was a group of frogs merrily hopping through the forest. They didn't have a 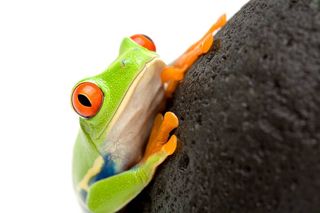 care in the world until two of the frogs fell into a deep pit. All of the other frogs quickly gathered around the large pit and peered down into its deep vastness. They all begin to scratch their heads trying to come up with a way to help. After a long period of time they couldn't think of a solution, they all agreed it was hopeless and yelled down to the two frogs to prepare for their fate and that they would never get out.

Unwilling to believe the other frogs, the two frogs jumped even higher. The group of frogs above the hole begin to shout even louder to quit, to give up, that they would never get out of there alive and it wasn't worth it.

After a period of time, one of the frogs gave heed to what was being said and gave up and died. The other frog though jumped even higher. The shouts of discouragement continued and got louder. And though he was absolutely drained of every bit of energy he had, this determined frog continued to jump even higher – in miraculous ways. Eventually he jumped so high he sprang right out of the pit.

The other frogs celebrated this frogs victory and then gathered around him in puzzlement. They said, "didn't you hear us tell you to stay down, you wouldn't get out?" In response to that the frog said "oh, is that what you were saying? I am hard of hearing, and I thought you were telling me to jump higher. I didn't think you were discouraging me, I thought you were encouraging me."

Two points I like to make when I tell this story are: 1) You will have many people tell you all your life, including yourself, that it is too hard, quit, don't try etc. Choose not to listen to it. 2) Being positive works. As a leader you can shape behavior so much better by being positive than being negative. Inspire people, don't knock them down.

What else could we teach others with this story? I look forward to your comments.

Here is a phenomenal video on the power of being positive from a past blog post. Click Here.

Previous post: Four Must Haves for One on Ones with Employees