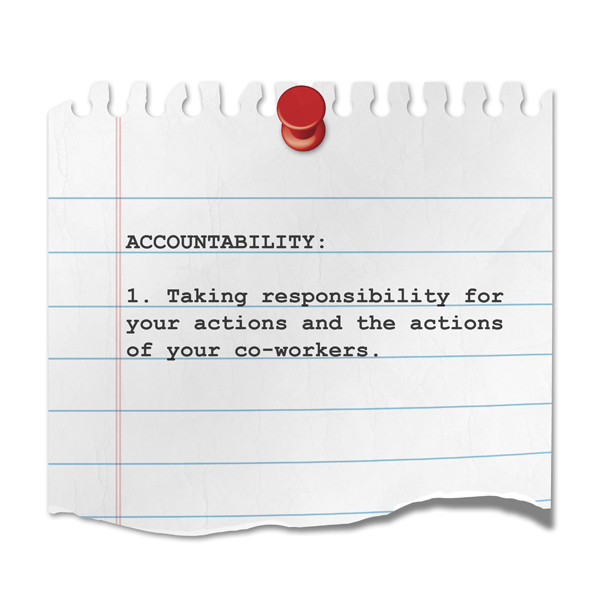 One of the key ingredients to being a great leader is Accountability. So many talk about it, but few walk that walk, especially out of eyesight or ear shot of their workplace.

One of my favorite authors is Linda Galindo and she said, “Whether you admit it or not, you are accountable for everything you’re involved with, whether it turns out good or bad. The outcome belongs to everyone who touched the project, not just the ones who made the mistakes.”

My son is twenty-seven now, but back when he was at home around the age of 5 or 6, we used to enjoy going out in the front yard and passing the Nerf football around. It was just the size for his growing hands and he learned quickly to throw a nice spiral.

Our routine was to warm-up by throwing the ball 5 to 6 feet apart and then lengthen the distance over time. Eventually we would always end up running routes and passing the ball to each other. There is nothing like a youngster who was an avid follower of Joe Montana to run routes and have the ball fall right into your hands upon making your cut by the bush in your neighbor’s yard.

Nonetheless, I snapped the ball, faked it to an imaginary back, while Nate ran a perfect down and out by our neighbors tree. As I stepped up and threw the ball, it slipped out of my hand and landed near the top of the tree. It lay stuck solid between two branches.

We threw a few stones, then tried a few sticks, and even tried to climb and shake the tree, but all to no avail. Then I got a bright idea. Why not throw our aluminum bat straight up and allow it to hit the ball. Now don’t get ahead of me…this is the day I learned that leadership and particularly accountability starts at home.

I wound the bat in a circular motion and released it with all my might. It launched into space like the Apollo 11 and blitzed right through the leaves and branches and made contact with the ball. The ball fell, but the bat kept going and going and going.  We even picked the ball up and began to play catch again when we came to the reality that “what goes up…must come down!”

As we stood about 15 yards apart, we observed the bat finally flipping over and starting its descent. It seemed to move ever so slightly but enough each second to indicate that it’s landing spot would be in my neighbor’s driveway near his new car – only 2 weeks old.

You guessed it! It hit the trunk and the bat bounced wildly and hit it again and finally rested on the concrete driveway. At that moment in time, my mind was blurred with thoughts of how will I explain this. Especially to my wife! I turned to look at my son and he looked at me. He then yelled with all of his might, “RUN”! And took off into our house.

Believe me, I wanted to. But the right thing to do was to be an example of what I had talked about. I marched over to my neighbor’s house and explained to him what had happened. I told him I did it and NOT Nate! I would pay for all damages.

It ended up being a sixteen hundred-dollar lesson! Ouch! But Nate to this day still remembers what I did! Notice I did not say he remembers what I said! Leadership, especially accountability, starts at home!

What other leadership principles start at home? We would love to hear your comments below. Thanks!

Next post: Being a Boss Not a Pal – 3 Important Tips and a Couple of Warnings