Ever Do Something Stupid? Brief and Very Funny Video 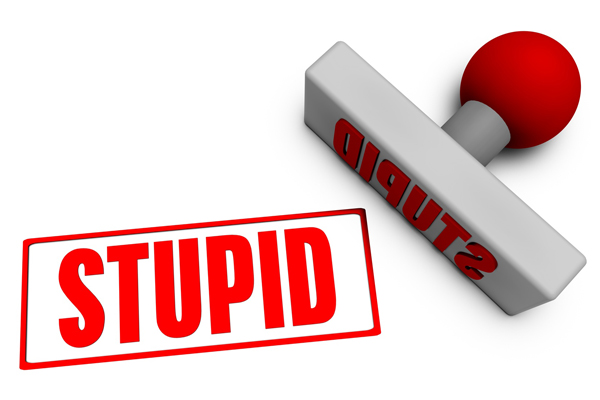 Ever do something stupid? It probably depends on who is defining what you did as stupid, right?

As I have stated before on this blog, leaders need to be careful of how quick they jump to conclusions. There are big implications when rushing to judgment and often time it does absolutely no good.

Imagine for a minute the consequences of the daughter in this video becoming angry. While it might certainly be understandable, it wouldn’t necessarily be right. If she had become angry she would have most likely hurt her father’s feelings. Or maybe he would become angry. Neither one would have solved anything.

Here are three things leaders must avoid when they believe somebody has done something “stupid.”

1. Don’t lose self-control. Leaders understand the power of self-control. Failure to control yourself is – failure. Leaders who quickly rush to judgment and become angry or go on a tyrant do absolutely nothing but lose the trust and respect of those they lead.

2. Don’t ignore. While it is important not to overreact, it is also important not under-react. What might have been stupid to you, might have just been a mistake that needs some coaching to correct. In the video below, if the daughter doesn’t say something it is likely her father will continue to make the same mistake.

While some leaders are way too aggressive, some are way too passive. They are both leadership flaws. Great leaders who care will give the difficult message or feedback in the spirit of development.

3. Don’t be Condescending. Have you ever had a boss or another leader that made you feel stupid? Leaders that make others feel stupid will find themselves in a very lonely place. The more stupid they make others feel, the less questions and ideas they will get from those they lead. That is a bad place to be as a leader.

Question: What are your thoughts? I would love to hear them below. Please comment.

Note: The following 33 second video is in German, but the message is very clear!

Next post: Personal Story on Empathy: All of us have our sad, sad moments.