The Importance of Teamwork – Something I Learned From My Teenage Son 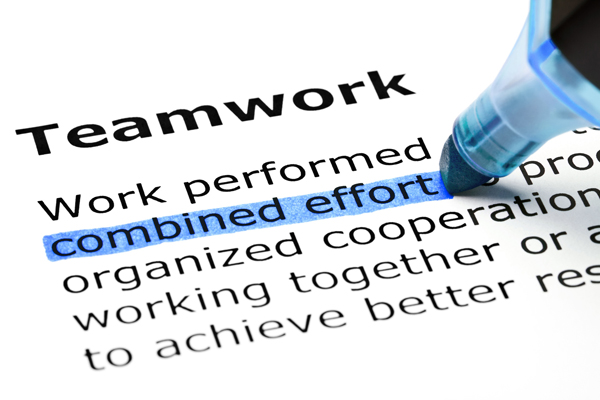 I am sure I don’t have to tell those who read this blog the importance of good old fashion teamwork.

There are a number of benefits to teamwork which include greater outcomes, better ideas, increased support, greater sense of accomplishment and quicker more efficient work.

I was trying to teach the importance of teamwork to my son the other day. He is a receiver on his high school football varsity team this year. A receiver, for those who are not familiar with the game of American football, is the one who catches the ball when thrown from someone else on his team, usually the quarterback.

His goal, like the rest of the team’s goal, is to take the ball after he catches it and run down the field without getting tackled and score points by getting to what is called the end zone.

My son does a very good job at catching and running. However, as he was showing me film from his last game I noticed that he wasn’t doing so good at the other parts of his position; primarily blocking other players from tackling his teammates when they had the ball.

I showed him how not doing his part affected his team because on a few occasions the guy he was supposed to be blocking was the one who made the tackle. While blocking is the least glamorous job he has as a receiver, it is critical for his team’s success.

Fortunately the next week he did a great job at blocking. Our team had an even better game that week as well!

Who does your blocking? And are you doing your part in blocking as well? There are countless opportunities in organizations for everyone to do their part. Teamwork in the workplace is critical, but may be lacking on your team or even in your organization as a whole. Here are three questions to ask yourself.

1. Are the members of my team clear on the goals and my vision?

This is one thing my son understood well. He knew the goal and vision of the team is to win games and win a state championship. But if he didn’t understand the goal and vision do you think he would have bought into what I was telling him about the importance of blocking for his team? Chances are he wouldn’t, because catching a ball and scoring brings him much more glory than blocking.

2. Are the members of my team clear on their responsibilities?

Team members who don’t clearly understand their roles will hurt the team because they will most likely become apathetic.

Again, my son understood that the goal is to win games. However, until we talked about the consequences of his lack of blocking he didn’t care. Though he knew the team goal, he wasn’t as clear on certain parts of his role in helping them achieve their goal. Not being clear on this important part of his role was hurting the team and would have continued to hurt the team.

3. Am I holding the members of my team accountable?

Ideally on the most functional teams, team members hold each other accountable. But there are times when the leader needs to step in. If myself, or my sons coaches had continued to ignore his lack of blocking it would have continued to hold the team back to some degree.

There are many benefits to teamwork. However, until all members of the team are clear on the goals, vision, roles, and are held accountable, those benefits won’t exist.

Question: How has being clear about the goals, vision and roles of each team member helped your team work better?