Teamwork and The Prisoner’s Dilemma – What Would You Do? 3 Tips

Years ago I played a teamwork mind game called the “Prisoner’s Dilemma.” Maybe you have heard of it?

Two criminals – who are co-conspirators – are locked away in two solitary cells. Neither can communicate with the other.

Both prisoners are interrogated by officials. Both are offered the same deal – if you stay silent you will only be sentenced to one year in prison; if you rat on your partner you get to go free; however,
if your partner rats on you, your sentence will increase to two years. What would you do? What would members of the teams you lead do?

The dilemma is you don’t know what your partner is going to do. Both partners realize there are big benefits to ratting the other out, however doing so could potentially create a lot more time in prison if they both choose to do so (two years in prison). The best solution is to just stay silent and if both prisoners do this they only spend one year. 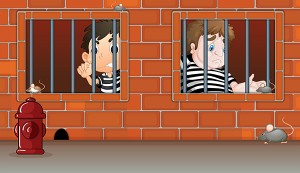 When talking about teamwork, the above scenario is a very real dilemma many teams face when members compete against each other instead of collaborating. And many times it is the leaders encouraging, though often not knowingly, competition (think sales teams and individual incentives, ranking of team members and the goal of winning at the individual level) instead of collaboration and teamwork.

Pitting individuals on teams against each other, competing against other departments and even competing against other companies hurts more than it helps in the long run. When teams, departments and even companies compete against one another they create disadvantages as information and best practices are withheld, the power of many minds working on similar problems is lost, lack of commitment to solving problems and getting results is a reality and sabotaging the efforts of others to get the “win” plays into effect.

The true dilemma in creating competition vs collaboration is that in order for individuals on your team to succeed, others have to fail – negating the proverbial win-win, which is at the heart of teamwork.

What can leaders do to avoid such dilemmas?

1. Communicate the vision. If each prisoner understood the larger picture, they would have worked together to create a win-win. But since they didn’t, collaboration didn’t seem like an option to either of them. They were blinded and sought the best result for themselves.

3. Keep score. It would be crazy to think that any major sports team could compete at a high level without a score. Defining what the score should be for your team is important to your team’s success. Keeping that score in front of your team is critical to sustaining success.

What ways do you avoid the prisoner dilemma?

Please feel free to share this post with others. We love sharing. Use one of the buttons below.

Next post: Why Is It Always The Leader’s Fault? Who’s Responsible for Teamwork?